Board of Directors ​/ Junta de Directores

Conflict Prevention and Resolution Consultant utilizing persuasion, negotiation and mediation skills together with my legal, business and civic experiences.

Legal and Business Experience
My entire legal career was in McConnell Valdés where I worked the two summers of law school and then full time after graduation from law school. I retired as Capital Member from McConnell Valdes on May 31, 2011 at the age of 67 in line with the firm’s mandatory retirement policy, thus ending 42 fruitful years of law practice and involvement on the executive and policy committees. I initially started in the tax department and after two years moved to the litigation department for approximately 2 years. With experience in taxes and litigation I transferred to the corporate department in which my practice was intense and varied in the areas of commercial contracts, real estate, government contracts, mergers and acquisitions, international trade, franchising and distribution, tax exemption/IRS Section 936, and mediation.

​My greatest satisfaction as attorney for a client or as neutral mediator has been helping negotiate and document a mutually satisfactory settlement and agreement. I took my first mediation course in 1992 sponsored by our law firm as part of the Lex Mundi College of Mediators in what I believe was the first course on the subject for practicing lawyers. I have continued to take courses in the negotiation and mediation area, including courses sponsored by Harvard and Pepperdine Law Schools as well as the course given by Attorney Daniel Nina at Sagrado Corazon University.

For 6 years commencing in January of 2008, I taught a one week seminar at the University of  Puerto Rico Law School on “The Effective Lawyer – Beyond Legal Expertise” emphasizing the need for lawyers to be responsive and persuasive with exercises in verbal presentations, writing, negotiation and mediation.  I have given Seminars on Effective Persuasion and Negotiation to private company employees and the general public through organizations as the Puerto Rico Chamber of Commerce.
​
Since the early ‘80’s, I have served on the Boards of numerous family companies operating dairy farms (Altamira, Borinquen and Elena), milk pasteurizing and ice cream plants (Caparra Dairy and Caparra Milk Products), industrial gases and related products distribution (GP Industries), and commercial real estate (San Patricio Village, including San Patricio Plaza, Galería San Patricio and T-Mobile Center).

I majored in Latin American Studies via the Spanish Department at Harvard (my senior thesis was on the Mexican writer Carlos Fuentes), and have maintained great interest in legal and business developments internationally with Board positions from the early ‘80’s in United Way International and Caribbean Latin American Action.  From 1991 to 1995 I was a member of the Executive Committee and Board of Lex Mundi during its initial years and which today is an organization composed of over 165 independent law firms throughout the world.  In 2002-3 I served as the first Chairman of World Service Group, a global multi-disciplinary association of independent service providers.  ​

I have also been involved in fomenting the export of products and services from Puerto Rico.  In 1994 I helped organize the International Trade and Services Association that I presided from the beginning until its termination in approximately 2011 when I retired from McConnell Valdés. From 1994 to 1996 I chaired the International Trade Committee of the Chamber of Commerce and in June of 1995 I received the Exporter of the Year Award.

Civic Experience
In the early ’70’s I joined the Board of the YMCA of San Juan whose major project was its relocation from Old San Juan to its modern facilities in Santurce. From there I went on to chair the United Way of Puerto Rico from 1984 to 1988 taking it from its rented offices to its new facilities contiguous to the YMCA.

I have received various awards for my civic involvement, including the Chamber of Commerce Citizen of the Year award in 1987, the United Way of Puerto Rico Rafael Fábregas award in 1993 and the United Way/Alexis de Tocqueville Society award in 2009.

Academic, Sports, Hobbies and Family Background
I am a graduate of Phillips Andover Academy, Harvard College and Harvard Law School. Sports have always been important to me. My principal sport at Andover and Harvard was ice hockey. I now enjoy golf, jogging, bicycling, boating, horseback riding, swimming, scuba diving, skating, hiking, and snow skiing. In both 2015 and 2016 I came within the top 5 in my age group in the Puerto Rico Half Ironman and in 2019 competed in the Tupper Lake Tinman. My principal hobbies are traveling, photography/videography and classical music. I am presently developing an agro ecotourism project in Cayey on part of the farm formerly owned and operated by my wife’s great grandparents.
​
I married Eva Luz (Pinky) Picó after graduating from Harvard College in 1966 and we have 4 children and 8 grandchildren. 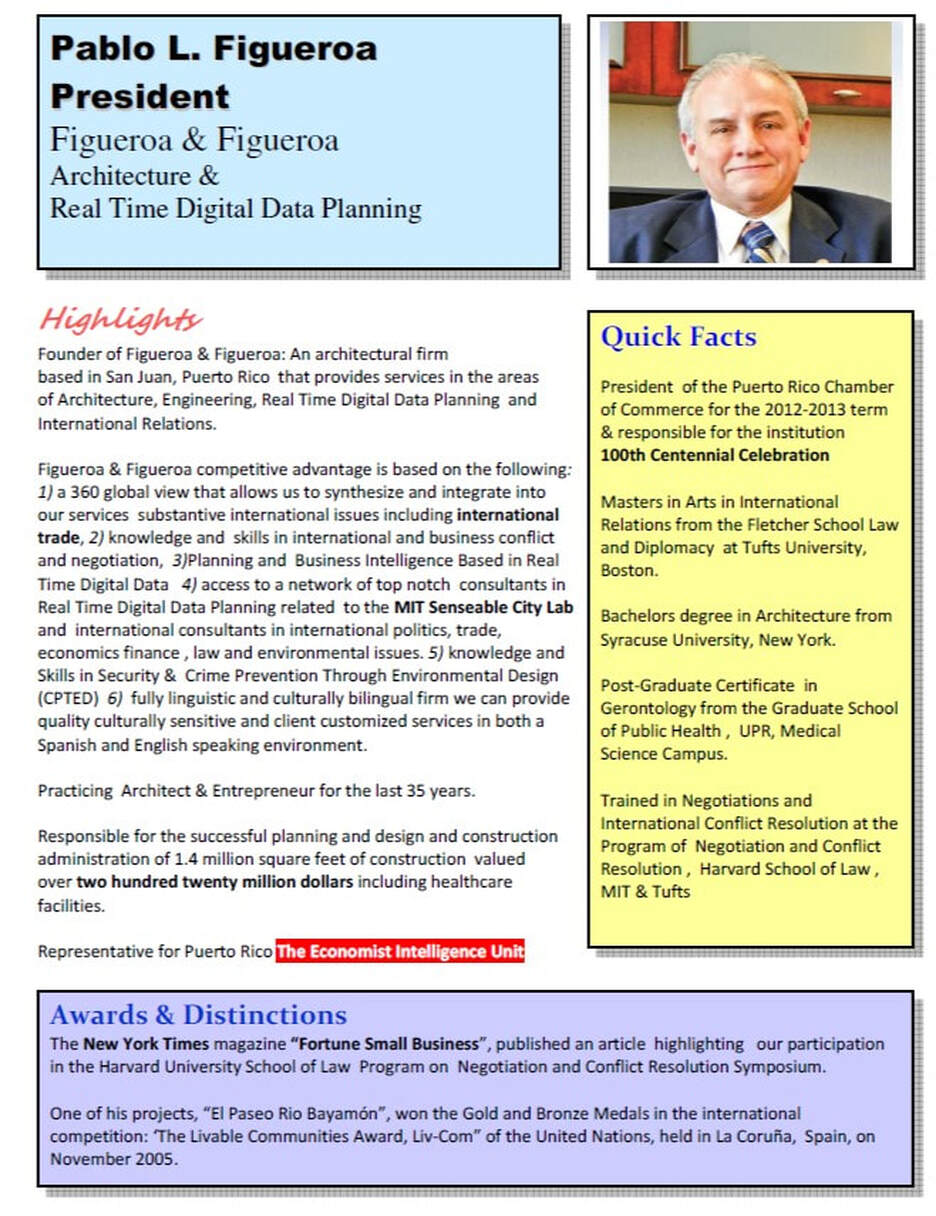